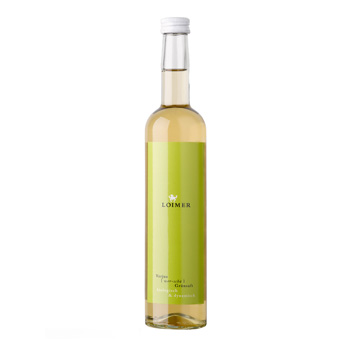 Intense aroma of fresh grape juice, acidity vibrating on the palate, like a bite into a crisp Granny Smith apple, apple slices with lemon, creamy texture with salty veins, the piquant acidity lingers long and delicately, pure or sprayed a wonderful refreshment.

History
From the Middle French vertjus, or “green juice”, this sour juice condiment is made from pressed unripe green grapes. In Europe, the healing effects of Verjus were known already in ancient Greece. In 400 BC, Hippocrates of Kos wrote about the uses of Verjus in medicine. And in the Middle Ages, the green juice – known then as Agrest – was common in Europe as an acidifier and for seasoning – e.g. deglazing. It also was recommended as a medicine because of its calming effect on the stomach and for easing digestion. Interest in Verjus began to wane after the crusaders brought lemons to the markets of Europe, where it eventually all but disappeared. However, in other parts of the world – such as Turkey, Iran and their neighbouring countries – this condiment has been used over the centuries for everyday cooking. Today, Verjus is once again taking its rightful place in the eche-lons of fine gastronomy.

Production
In our area, the grapes for Verjus are gathered shortly before they become soft – at the end of July and the beginning of August. Just as it is for wine, the time of harvest is very important for the quality of the product; the longer the wait, the more intense the aroma. A late harvest date brings not only a distinct grape aroma but also higher sugar concentration. The acidity of the grape juice does not decrease significantly in grapes gathered later but, thanks to the sweetness, is better integrated. Verjus with a higher sugar content provides more of a flavour base for mixed drinks, while Verjus with little sugar content is optimal for cooking.
After the harvest, the grapes are pressed and, following a short maceration to take away any murkiness, careful filtration takes place. Then, once pasteurized, the green juice is bottled.

Uses
Verjus is a unique flavour base for refreshing and mixed drinks as well as a mild alternative to vinegar, lemon or wine in the kitchen. It is milder and rounder than vinegar and has an aroma that’s finer than that of lemon. Alcohol-free and low in calories, Verjus enhances sweet dishes as well as wine-accompanied cuisine.

Verjus is practically ideal for:
– enhancing soups, sauces, stews and salads
– poultry, fish or grilled dishes
– for preserving vegetables and fruits
– as a flavour base or for enhancing refreshing thirst quenchers
– as mild, fruity substitute for vinegar in salads
– as a special flavour enhancer with fine sour, fruity notes for sorbets and other desserts
– as a piquant ingredient for fruity bar drinks and mixed drinks